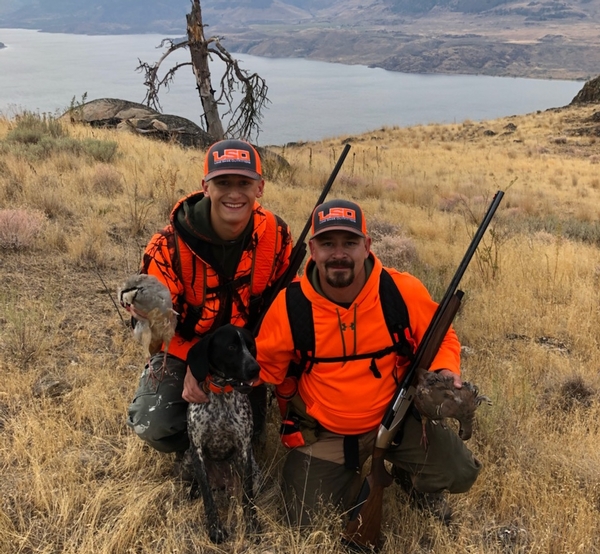 I know, I know…I have been failing to keep up as of late.  Since the WA dove opener it’s been a whirlwind. So here are the highlights:

Washington dove opener.  This was my first real time hunting dove.  I went out with Cousin Brian and his crew.  There was a modest trespass fee to access some known dove areas around Moses Lake.  We set up camp in strategic locations and waited for the sun to come up.  After three misses in a row, I connected and didn’t miss again until I had my limit of 15.  Everyone was done by 12:30 pm!  Not bad right?

Annual September Montana Trip.  Last second my planned travel partner had some stuff come up so the dogs and I rolled hard anyways.  We hunted our usual spots but were not running into many birds.  We covered many miles on foot each day, and kept pushing east to chase the productive reports.  We averaged a covey of sharpies or sage grouse each day.  From all of the ranchers I spoke with the state was hit really hard this past winter.  However, there are some patchy spots that held up and good hunting can be had. Shot very well with no misses, but only a few birds a day to hand.

Idaho Chukar Opener.  Again, my pre-planned travel partner had something come up, so just the dogs and I again.  I checked the weather and it had a possible high of 61, perfect!  Arrived at spot a bit late, no worries nobody around but the dogs and I.  On the first hike up ridge I was feeling very weak, and sweating a ton?  Even worse the dogs seemed to be dragging there rears a bit.  So after a few coveys and some so-so shooting, birds were in vest and we bailed down the hill to the river.  The dogs and I hopped in to cool off and wash the sweat and dust off.  When we got back to the truck it was 10:45 a.m., and 81 degrees!!!!!  What the heck??  I realized my error that evening.  The town I used to check the forecast was at 5100 ft., I was hunting at 1250 ft.  OOOOPPSS.

Washington youth hunt.  We got Trigger man Ty out for his first real bird hunt. let me describe it like this: three pro guides, 4 high end dogs, 2 coveys of huns, 2 coveys of quail, over 80 phez, one 12 year old with an empty box of shells.  Priceless.  That young man got after it, and it wasn’t no fortnite.

Washington chukar opener.  Steady B, Nelson and his kid, and Mr. Miagi all hit the Wall for the day.  13 coveys moved.  Some bad dog work, some good dog work, and some wrong place wrong time stuff.  We didn't harvest many birds. I didn't get a shot off that day.  It happens sometimes.  The birds appeared to be awfully flighty for the first hunt of the year. I think it was the presence of lots of older birds.  11 miles or so hiked and tons of birds.  The coolest part was my wife hiking in terrain most dudes I know would cash their chips in if faced to hike that long in brutal country. Highlight, the next day Nelson and his kid had a teamed double on a covey their young shorthair pinned.  Mr. Miagi located some new haunts and scratched some birds as well with a triple.  Not bad.

The Q.  Hit up the area where it all started for me in my chukar pursuits.  I was accompanied by the cast of KOO, also tagging along was the Nelson crew. This is a special place with lots of memories.  Some of my best friends in the world, solid dog work, and some good shooting.  CEO afforded everyone new game bags which was amazing. The team was awesome and Clooney had his 36th chukar trip in a row with not only one bird, but three. For the record, young Dru Hill has the makings to be a real chukar slayer.  They are all rock stars, and I was 0 for 6.  LOL

There it is, a month’s worth of ups, downs, and all arounds.