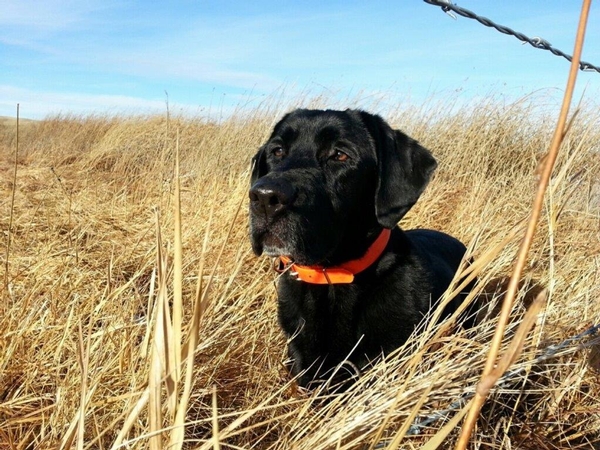 Most who know me, also know I am a boxing man.  So much so, that I have named the majority of my pups after my favorite pugilists.   Also known is that I currently run wirehairs, but have owned and operated shorthairs, setters, pointers, and labs.  I love all hunting dogs plain and simple.  But today I want to speak about two of the most no-nonsense game-day bird dogs ever. This has nothing to do with flushers vs. retrievers vs. pointers - just flat out monsters in the upland fields.  Let me tell you about two of my favorites ever: Gunner (RIP) and Rio. These two champs are blood related to an intimate group of labs that are amazing on land and in water: Fergie, Delta, Bindee, and Cooper.  But Gunner and Rio are at a different level.

Gunner was my first hunting dog, an extremely large (tall and built, not chubby) black pointing lab from Tiger Mountain Kennels. Despite being an amazing swimmer he had no interest in getting in the water, unless of course there was a downed bird.  What he did love, and did extremely well was chukar.  He never ranged more than a hundred yards, and would pin singles and road coveys better than most of the  “pointing” breeds I hunted over back then.  Now don”t get me wrong, I couldn’t expect him to hold for five minutes, but more often than not, he held until we got to him.

Rio is owned and ran by T.K., a childhood friend who I hunt with to this day. This pup is out of Long Hollow Retrievers, which was an offshoot of Tiger Mountain Kennels. Rio was the runt of the litter, and the last pup to be taken.  His owner has raised and trained him in a loving and low pressure manner which is immediately noticed when you meet the dog. He is soooo chill. When you see Rio around the trucks nothing jumps out at you like “Whoaa! That dog is going to set the prairie on fire!!”  But don’t sleep on this dog, he is a cold hearted assassin. Those who have had the fortune to hunt over Rio have seen him produce birds that six other dogs missed.

At 7 years old Rio is the canine version of James “Lights Out” Toney in his prime.  Physical stats aren’t anything special on the tale of the tape, but like James Toney, Rio is a slick, defensive styled counter puncher. Rio doesn’t charge out in the field running fast and crazy, as a matter of fact he doesn’t range very far from his handler at all. Almost like a walk in the neighborhood.  However, when Rio scents birds, it is on.  When he hangs a quick right, and begins demolishing cover in his way, itís a guarantee birds are getting up. While in Montana one year we were banging out roosters in my favorite pheasant area of all time. We were in hot pursuit of some cocks we saw touch down a few hundred yards in front of us.  Upon arriving at the spot, dog 1 goes by getting pretty birdy, but nothing.  Dog 2 (Manny) jogs through points, but can’t lock it down.  He sniffs around and moves on. Then comes in Rio.  He picks up the scent, starts doing his thing inhaling ever molecule of bird he can.  He spun sharply to his right and snorted to the edge of the shoreline where his front paws were 3 inches deep in the water.  Nothing there but never-ending pond and some very light grasses sticking out of the water. I thought the bird had flew off from right here, but I noticed what I thought was a rooster head sticking out of the water?????? So I began to step forward when the rooster exploded up and out of the pond like a Trident missile fired from a submarine!!!  There was water and wing beats and everywhere.  T.K. dropped the bird with one shot and Rio retrieved the soaking wet Rooster.  Just like James Toney, let your guard down and BOOM!  It’s LIGHTS OUT!

Gunner started his championship years at about 6 years old.  He so reminded me of one my favorites, Smokin’ Joe Fraizer.  A relentless and punishing fighter that would never stop,  but quite withdrawn and almost aloof when not in the ring.  As with Gunner, when not in the field he kept to himself and laid on his bed by himself, rarely looking for any attention. In the field at 90 lbs. of strapping muscle, and a shiny black coat, gunner would roam the chukar hills from dark to dark. He would scramble up through rock outcroppings, dive into canyons for massive retrieves, and resume his search for more birds.  Like Rio, when he pointed or got birdy, birds were always found. In 15 years of hunting I could count the number of birds lost on one hand. While chasing chukar one year on the Oregon side of Hells Canyon, I was partnered up with a buddy who had two awesome shorthairs.  He jokingly balked at my giant “pointing lab,” which I was used to.  Mid-day, Gunner was methodically tracking straight up slope to a vertical rock wall.  I yelled at my buddy to get ready.  He waved me off and followed his pups down the ridge. The helicopter tail started and two seconds later he locked up mid stride. Butt up, and his shoulders low in the front like Mike Singletary circa 1986.  I hustled up the scree gully, passed Gunner on point and slowed way down.  As I moved across the mini bench the covey exploded all around me and I stumbled backwards a few steps.  I swung high and left and hit a bird that folded at first and by the grace of little baby Jesus, it came back to life and set his wings.  I lost sight of the bird as he screamed down mountain with Gunner in a distant trail.  I sat down on the rocks and waited.  My buddy showed up and he had smoked a bird overhead from my covey that almost landed on him. He asked me if I thought Gunner would be back with that bird???? Without a doubt I thought, but said nothing.  30 minutes later I said I was going to head down and go see what was going on.  I stood up and immediately saw Gunner cresting the ridge from below with a live chukar in his mouth.  My buddy couldn't believe what he had just seen.  We ended the day right there, and traced Gunners tracks down the hill in the snow and saw where he fought with the resilient chukar.  We estimated 400+ yards from the shot to the retrieve location.  Like Smokin’ Joe, relentless and punishing.

Everyone’s hunting dogs are awesome and special, just ask the owner.  Having said that, I will put these two kings of the ring up to the Pepsi challenge: and whoever steps up to the line is getting knocked the F out!  Wooooooooooooo!  WWCFD.